Electric and hybrid vehicles are increasing demands for on-board power in automotive designs. Adding greater power requirements to already electricity-hungry specialist vehicles will sport new architecture to support that growth – and that’s exactly what 48V systems seek to do.

Diesels are in a state of serious decline. In Europe, diesels fell from 49% of the market down to 36% between 2016 and 2018, according to the European Automobile Manufacturers Association.

Once the fuel of choice, diesel is now a dirty word. Due to their nitrous oxides (NOx) tailpipe emissions, diesel engines toxicity has become a matter of concern for regulators. Matters have not been helped with the 2015 scandal that engulfed the industry. Now, carmakers in the specialist sector are facing new standards and regulations. This has forced the automotive industry to start seeking alternatives. At the moment, the automotive battery technologies are not enough to support heavy-class commercial vehicles. Even now, very few compact passenger vehicles provide a range further than 200 miles.

As a short-term option to bridge the industry to the future, ‘mild’ hybrids have begun to spring up. These introduce electric-powered motors that work in conjunction with a diesel engine to bring the efficiency benefits of electric vehicles without the lengthy charge times needed to get back on the road.

What is the difference between 48V and 12V?

48 volt systems deliver more power at lower currents than existing 12V battery-powered systems on their own. They can support heavier loads, which paves the way for the next generation of electrified sub-systems.

As a result, it provides more power without as much cable, helping automakers improve efficiency all the while reducing kerb weights. With the current electrification trend, more cables and battery weight are being added to vehicles. Saving this weight by adopting 48V will help manufacturers comply with new regulations.

It is not the death of diesel that’s brought this on alone, though. Throughout recent decades, purely mechanical automotive subsystems have begun to harness the power of electronics. These mean vehicles are launching with new fuel-saving, emissions-reducing, and experience-enhancing features. Think: steering; oil and water pumps; heaters; infotainment features.

Under a mild hybrid design, high voltage power also gets introduced to the vehicle. This means there’s the potential to introduce many more electronic control units (ECUs), to support the on-board charger, HV-to-48V converter, the main traction inverter and more. The impact of 48V

48V systems will improve fuel economy by as much as 15%. By bringing aboard more power, manufacturers can introduce new subsystems that seek to deliver better control and efficiency – all resulting in reduced emissions.

Modern vehicles have far more sophisticated electronics than ever before. With the possibility of autonomous driving on the horizon, more automobiles are being equipped with advanced sensor technologies and radars. Reverse cameras, road condition sensors and motion detectors (for automatic emergency braking) are becoming commonplace in today’s vehicles.

When announcing 48V-enabled vehicles, many of the largest auto-manufacturers took the opportunity to highlight the enhanced performance that switching-up provided them.

48V is helping produce more low-end torque, with greater acceleration and even offering improvements to top-end performance. In the new Golf GTE, Volkswagen claim that this ensures greater dynamics and driver comfort. Connecting the new standard, and beyond.

Rather than using an alternator, an additional 48V battery in vehicles brings new possibilities to specialist vehicles. With this new standard, the rest of the industry needs to be able to accommodate these new power requirements, particularly with future connected possibilities on the horizon.

Dalroad’s partners have already launched a range of flexible solutions for 48V applications. TE Connectivity have connectors and terminals available for a variation of 48V standards already in use. For more information, browse through Dalroad’s range of components for specialist electric vehicles or get in touch with one of our automotive specialists today for assistance with your 48V project. 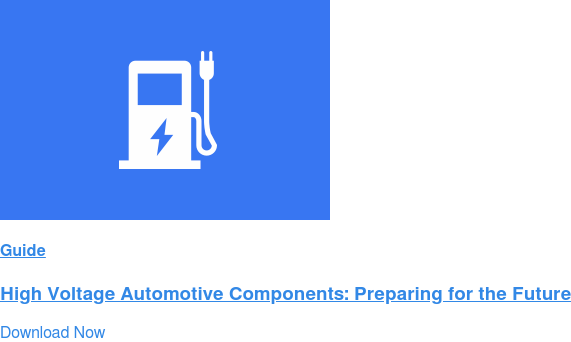 EV Fleet Charging: Can You Switch with Confidence?

What can engineers do to make high power EV charging infrastructure safe?